** DESTINATION OF THE PILGRIMS WAY **

The principal entrance to Canterbury Cathedral is Christ Church Gate. 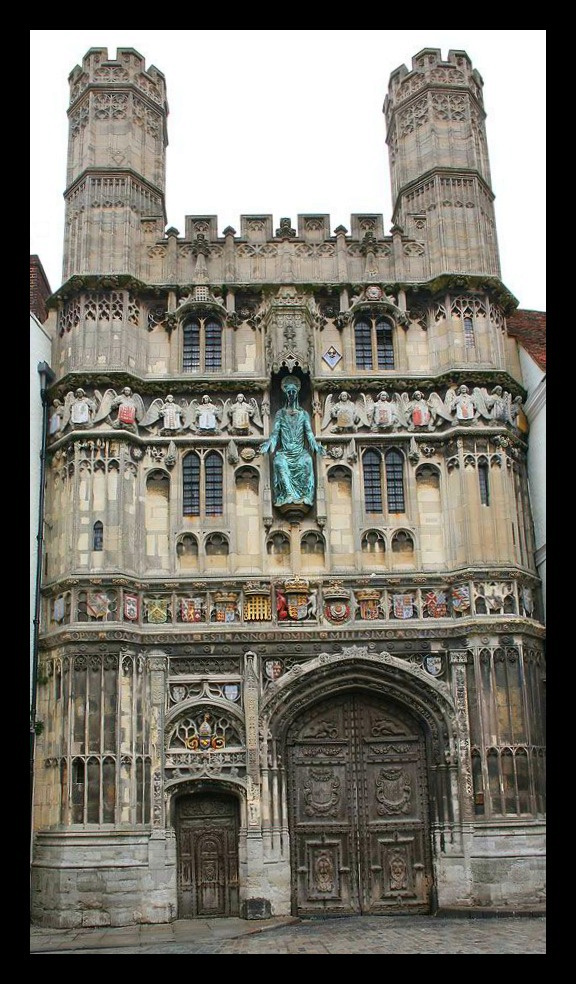 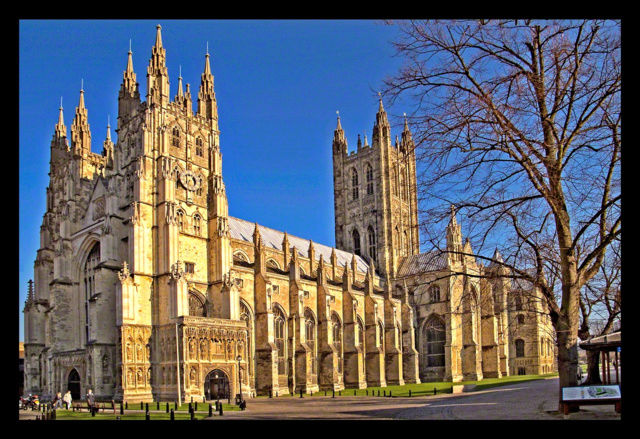 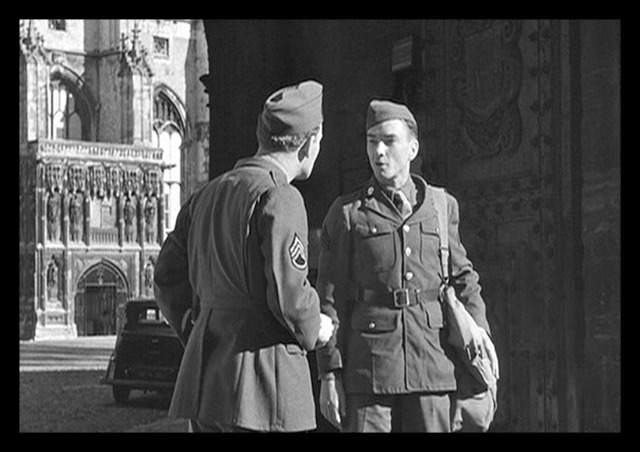 THE BOMBING OF CANTERBURY DURING WORLD WAR TWO

Around 12:45 am on the 1st of June 1942, the sirens sounded in Canterbury as the first wave of 16 German bombers dropped parachute flares to illuminate the city for subsequent waves of attacks. For about an hour a mixture of High Explosive and incendiary bombs rained down. One bomber did a low level attack on the cathedral and dropped a number of incendiaries on it, but Fire Watchers were ready and quickly pushed the incendiaries over the roof to burn out on the grass below. Others that had flared up were quelled before any serious damage could be caused. Unfortunately, they were unable to save the Victorian Library by the Chapter House. Hastily scrambled RAF nightfighters and anti-aircraft guns could do little to stem the tide of German bombers. The all clear sounded at 2:10 am. The raid had lasted 75 minutes and left the city devastated with many buildings on fire. The smokescreen that hung over the city was so thick that no one knew whether the cathedral had survived. It had survived, but not unscathed. A huge bomb, the heaviest ever dropped on Kent, had exploded near the entrance to the Warriors Chapel and the stained glass windows were blown out. More than 200 firemen from all over Kent were called in to tackle the fires. Along with other rescuers, they worked for 24 hours without a break. They only way to contain some of the fires was by sacrificing some streets as firebreaks such as Butchery Lane. By dawn most of the larger fires were under control or extinguished and members of the Civil Defence, aided by troops, helped dig people out of collapsed buildings. The second big attack was on the afternoon of the 31st of October 1942, when 30 FW190 fighter bombers came in at roof top height, machine gunning the streets, filled with Saturday afternoon shoppers, and each dropping one bomb. The bombs were fitted with delay fuses to allow the attackers to get clear. There were actually 9 individual bombing raids on the city during the war which resulted in loss of life. In total, it has been estimated that Canterbury received some 10,000 incendiary bombs, 445 high explosive bombs, and just one flying bomb. About 115 deaths were recorded, 140 seriously injured civilians, and 240 slightly injured civilians. Also, 808 properties were wrecked beyond use, 1,047 were seriously damaged, and a further 5,691 slightly damaged.

The view Alison Smith sees as she walks through the bombed city of Canterbury in sight of the cathedral. 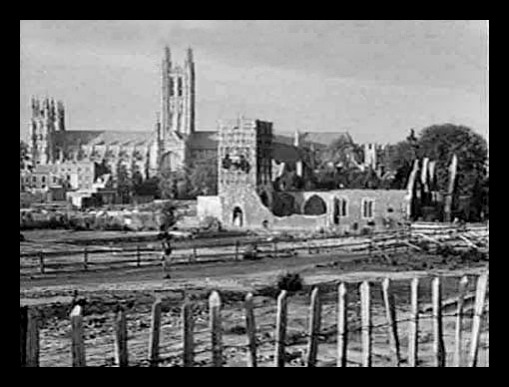 The aisles of Canterbury Cathedral were filled with earth to fight fires and to provide a soft landing for any sculptures or masonry that could have fallen down from the ceiling during the air raids. 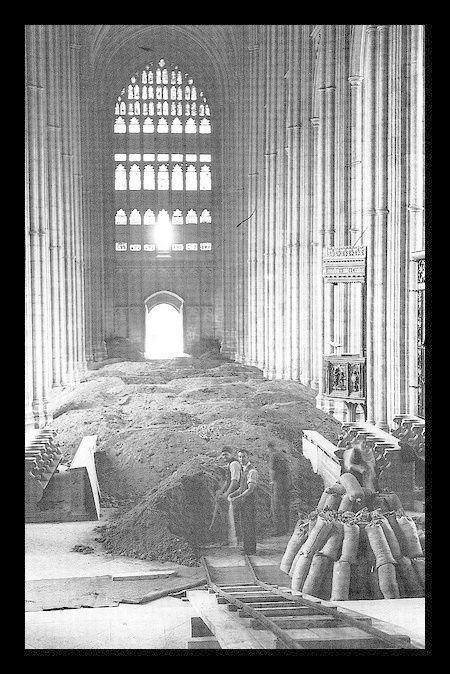 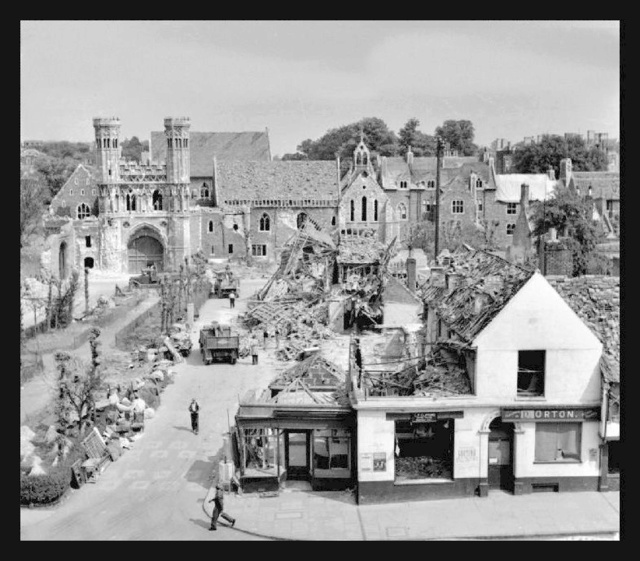 Children running to shelters during the bombings in Canterbury. 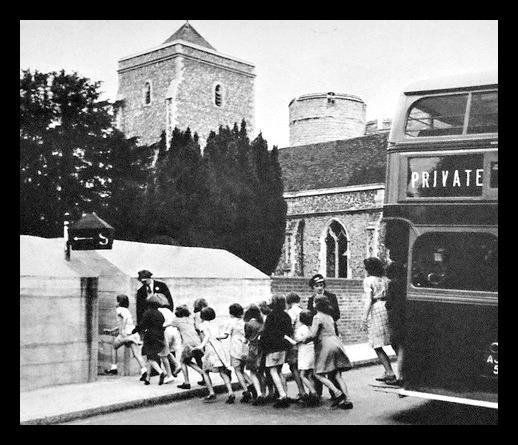 A devastated Saint George's Street. Incendiary bombs started fires which destroyed most buildings. The streets of Canterbury were eventually rebuilt with a collection of typical fifties buildings although those around the clock tower came later. 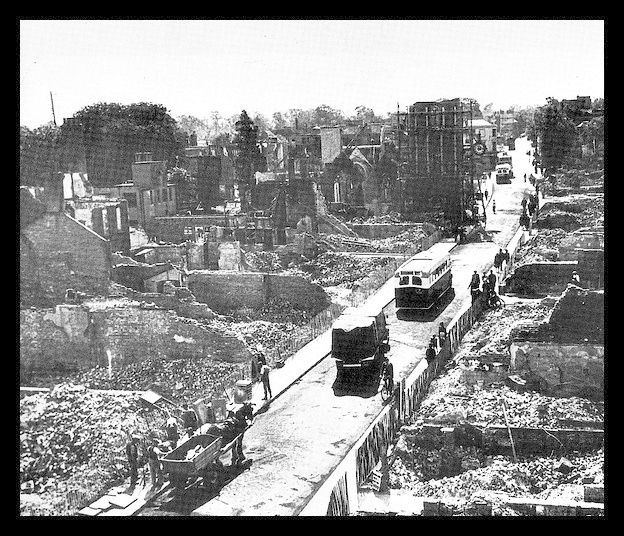 The clock tower was restored and is one of the great reminders of a night that changed the city of Canterbury. 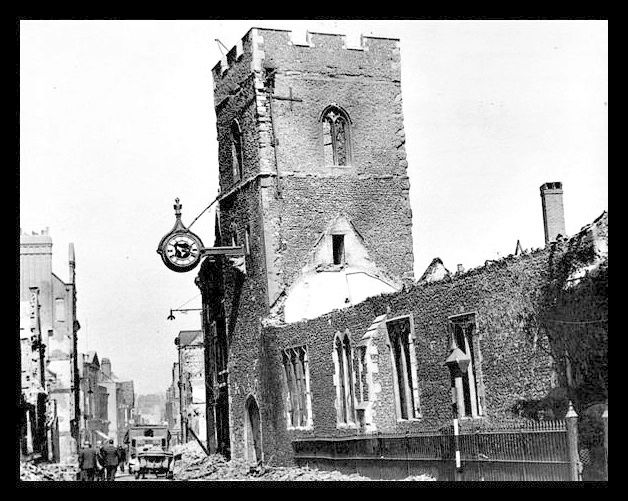 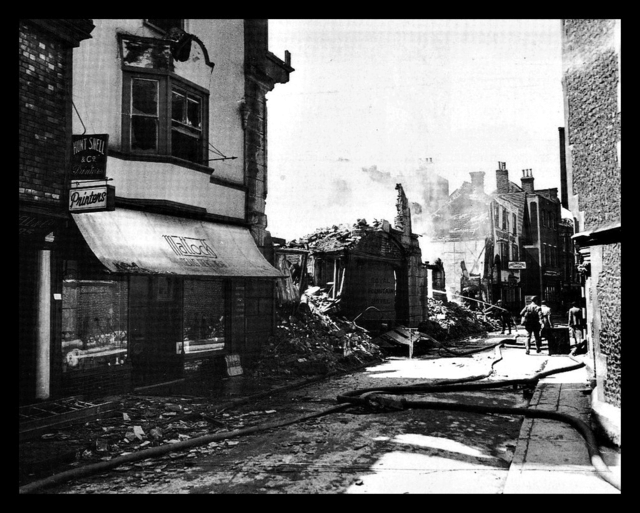 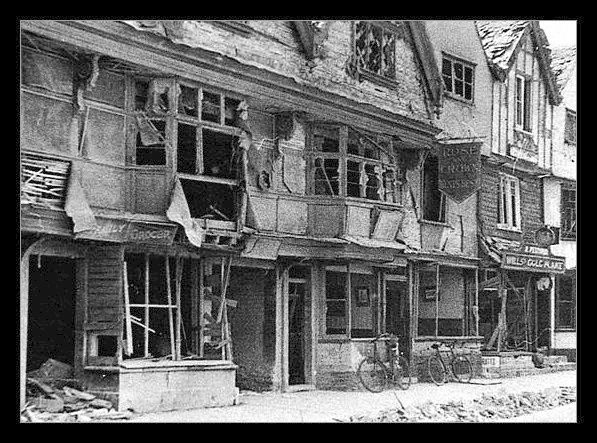 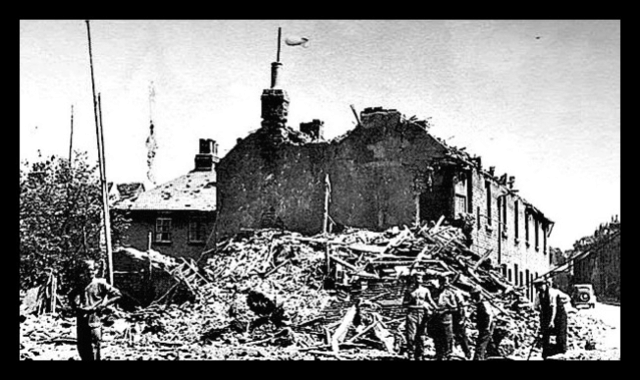 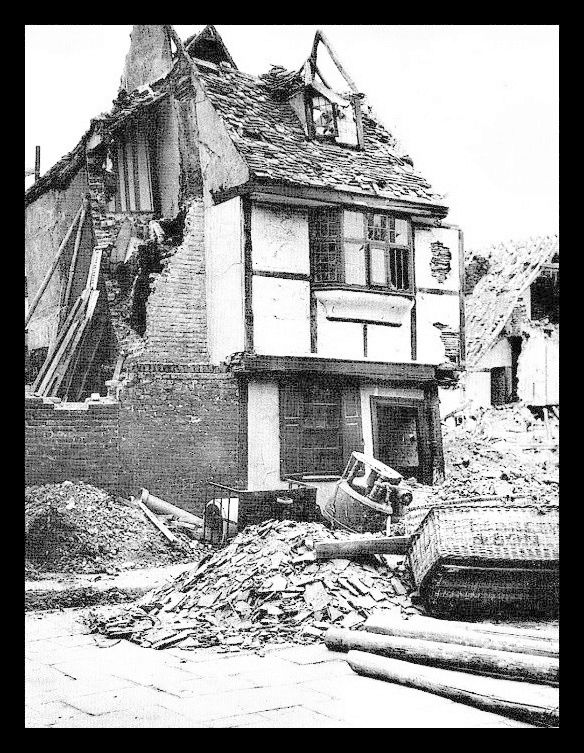 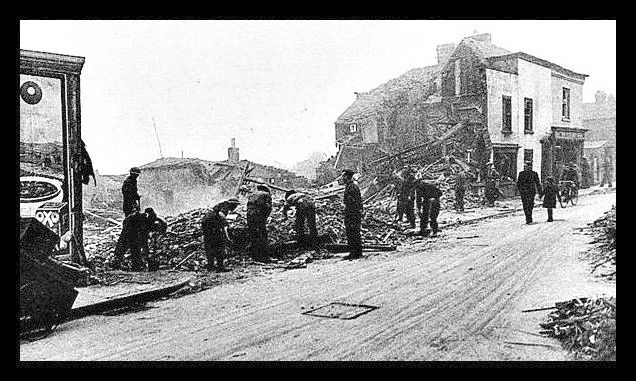 There were many heroes in Canterbury during the night of the 1st of June, 1942, and the days that followed. Among them were these ATS girls who took out their staff cars and conveyed casualties to hospital whilst masonry was crashing down around them. 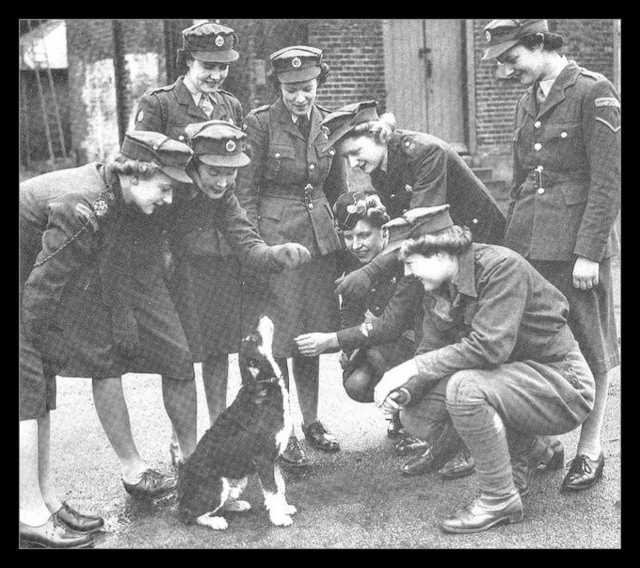 The Duke of Kent toured the bombed city of Canterbury on the 4th of June, 1942. Here he is speaking to the girls from Marks & Spencer. 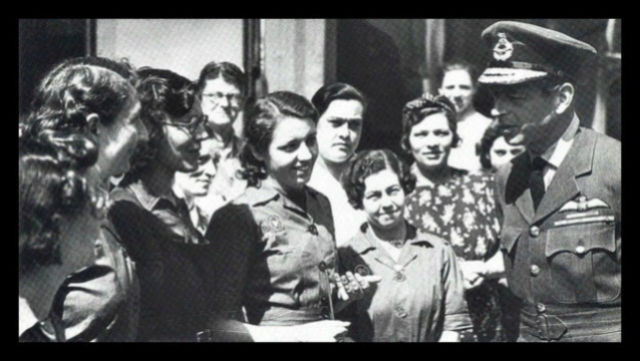 The Duke of Kent and the Mayor of Canterbury inspect the bomb damage to the Rose Hotel. 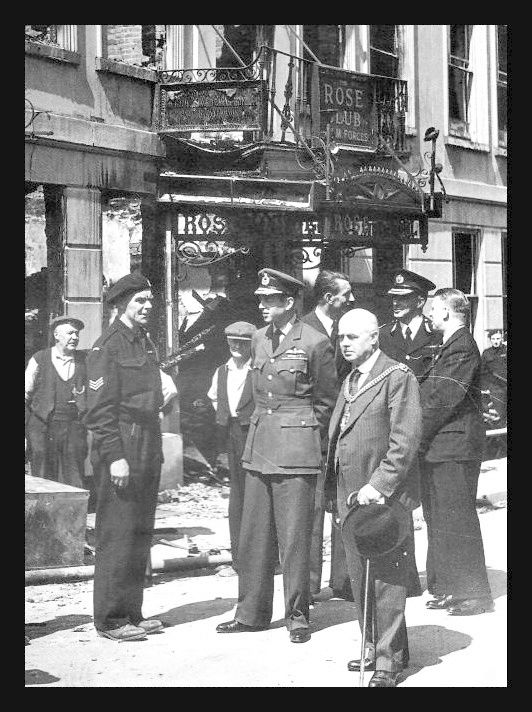 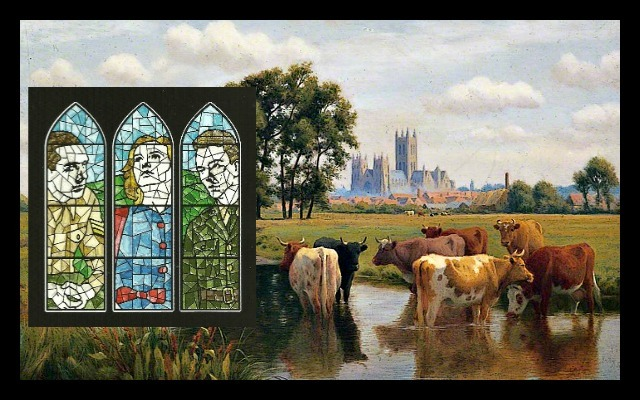